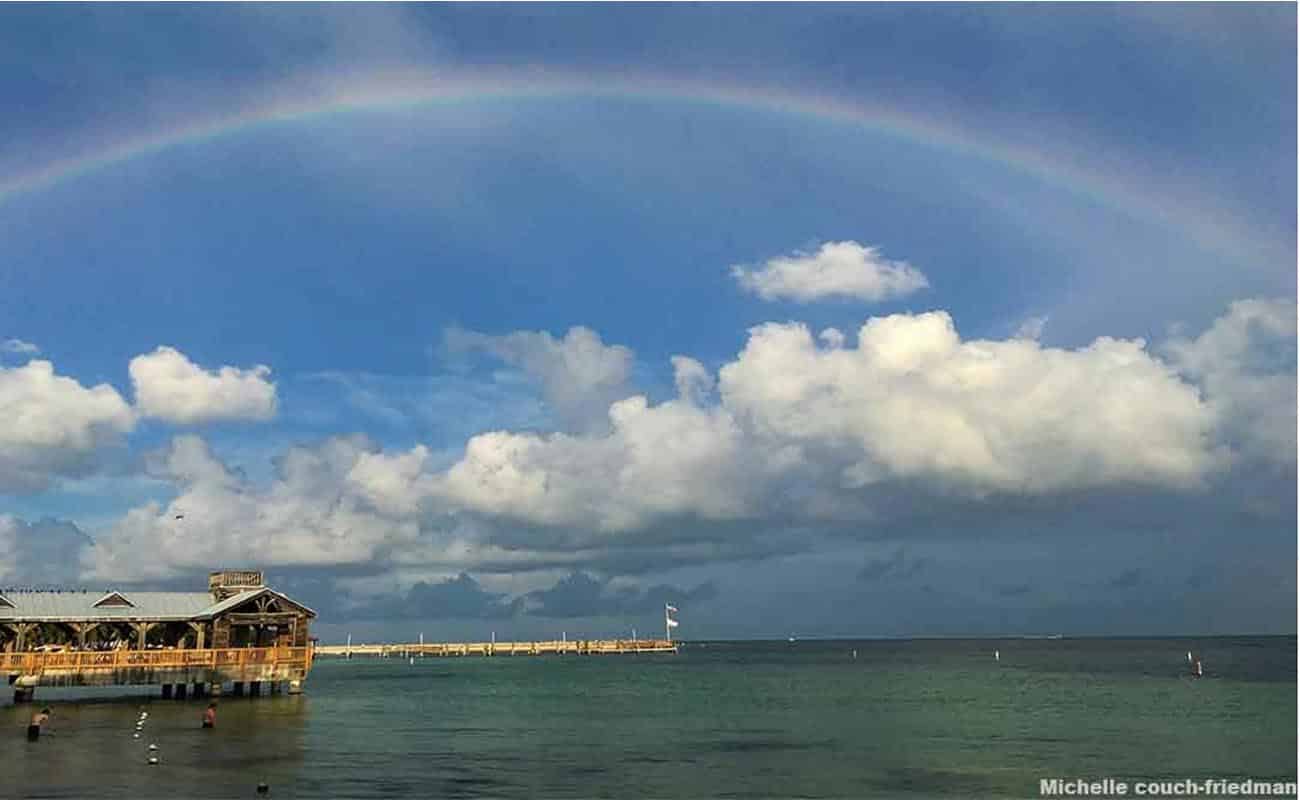 But the shock of getting smashed by an intoxicated motorist was nothing compared to the jolt Joe received a month later. That’s when Budget Rental Car sent a $22,158 bill — the cost of the vehicle damaged by the drunk driver.

Now Joe wants our advocacy team to help get his bill zeroed out.

The Vandettas arrived in Ft. Lauderdale last December, intending to take a road trip to the Florida Keys. Having escaped the dark Ohio winter, they were looking forward to soaking up some sun and fresh air. At the Budget counter, the family decided to upgrade their rental car to a spacious SUV for their road trip. That decision likely protected the family from a more ominous outcome to the events on Day 3 of their vacation.

On that day, the family had made their way to the southernmost point of the continental United States — Key West.

After an enjoyable time exploring the island city, the family climbed back into their Pathfinder just after sunset. They started heading north to their hotel in Marathon Key, some 45 miles away.

It wasn’t long before a drunk driver shattered their plans for the evening.

The Overseas Highway (US Route 1) is, for the most part, not a highway at all. It’s a rural, undivided two-lane road. It takes drivers through a series of picturesque island towns (keys) from Key Largo in the north to Key West in the south.

The Vandettas hadn’t gone far when a vehicle going the other way suddenly crashed into their rental car.

The impact sent the Pathfinder careening off the road.

Anyone familiar with Florida roads knows they are often lined on either side by murky canals filled with alligators. So being suddenly propelled off the road into swampland can be pretty dicey. But luckily for the Vandettas, their SUV ended up in a sandy ditch — no giant man-eating reptiles included.

When the Pathfinder came to rest, Joe checked to make sure everyone was okay in his vehicle. Relieved that no one seemed to be injured, he climbed out of the car just in time to see the hit-and-run motorist swerving away. But the crash had disabled the Pathfinder — this rental car had reached its end.

Within minutes, the police arrived. As Joe began to talk with the officers, a stumbling pedestrian suddenly appeared on the scene.

He identified himself as the owner of the car that had crashed into the Vandetta’s rental car. The man appeared quite inebriated, and the police officer noted the same in the official report of the accident.

Driver #1 was intoxicated and could barely stand up when he arrived back at the scene of the accident on foot. He admitted that he had left the scene, parked his vehicle at his residence and then [walked back to the collision site].

The official police report of the drunk driving accident

After observing the man’s highly impaired state, Joe realized just how lucky his family had been. If they had been in a smaller car as they had initially planned, this drunk driver barreling along in his super-sized Tacoma pick-up truck could have easily killed the entire family.

But the narrowly averted tragedy seemed to be of no concern to the oblivious drunk wobbling in front of the group.

The drunk driver crashed into us and demolished our rental car.

Discombobulated by everything that had just happened, Joe called Budget to alert them of the crash. Then he called for a car service.

He watched as a tow truck came and took the disabled rental car away. Then he and his family climbed into a Lyft and took an expensive ride to Marathon Key.

“We just wanted to get back to our hotel and relax,” he recalled. “We hoped to enjoy the rest of our vacation.”

And they did — minus the rental car, thanks to the selfish and careless actions of a drunk driver.

Budget: “You are responsible for the car rental damage regardless of fault.”

About a month after their trip to Florida, the Vandettas received a shocking request. Budget Car Rental expected them to pay for the entire cost of the vehicle the drunk driver had demolished — $22,158.

Relieved, Vandetta assumed that he wouldn’t hear about this vehicle again.

The car rental company had a few more ideas to extract additional funds from the victims of this drunk driver.

Budget: “[After the crash] you returned the rental car late and to the wrong location.”

Soon after, the drunk driver’s insurance company processed the claim and covered the damaged car rental. Then a judge ordered the impaired motorist to pay some additional costs directly to the Vandettas.

The family began to let the memories of the traumatic accident fade. But then a letter arrived from Budget that reignited the negative feelings of the experience. Joe’s initial curiosity about the letter soon turned to rage.

Budget charged our credit card without permission for $2,370 for not returning the vehicle to the correct location and for returning it late. These things happened because a drunk driver crashed into our rental car head-on. It was being repaired or at a tow yard during that entire time. This treatment of customers who, along with their young children, were almost killed by a drunk driver is made all the more unconscionable [because] insurance covered the cost of the entire vehicle.

For the next two months, both Joe and his wife appealed to Budget to remove the charges from their credit card.

Unfortunately, we cannot adjust any portion of your rental bill. Please review your responsibilities as a renter on our site. (Budget’s response to the family’s request to reverse this charge)

Car renters beware of Loss of Use and administrative fees

The Budget agent pointed Vandetta to information that justified the additional charges as “loss of use” and “administrative fees.”

Other Fees After an Accident

Loss of Use: As a renter, you are contractually liable for the loss of the specific vehicle you rented, per the terms and conditions of the rental contract. When a Budget car is unavailable to be rented, Budget is entitled to be compensated for that loss.

Administrative Fee: Budget is not an insurance company. We are self-insured, and the expense of processing our claims is passed on only to the responsible parties involved. We are legally entitled to have the damaged vehicle repaired and returned to pre-accident condition, which includes any expenses related to administering a claim.

But the bill Budget sent showed that it charged the couple a one-way drop-off fee of $300. The rest of the invoice showed a daily rate plus taxes for a month after the accident. Nowhere on the document did it indicate a Loss of Use fee.

Not knowing where else to turn, Joe next made a complaint with the attorney general’s office in his state.

When that didn’t result in a refund of the $2,370, Joe then sent a request for help to our advocacy team.

So who should pay for the car that the drunk driver demolished?

When I read through Vandetta’s paper trail, I hoped we could quickly put an end to his four-month struggle. After all, he and his family were victims of a drunk driver and insurance had paid for the demolished car. The charges Budget applied in this new bill were not mandatory. These were internally created fees by someone at the car rental agency.

The $300 one-way drop-off fee was particularly curious — the invoice showing that the car had been returned to Miami instead of Ft. Lauderdale.

We know that car rental companies routinely charge customers high fees if they return a vehicle to the wrong location. Regular readers may recall that Andrew Duprey recently got an expensive shock when he inadvertently returned his car rental to a site 3 miles away from the intended target on his contract. That little mistake led Hertz to charge him $951 for a one-way drop-off fee.

But in Joe’s case, he had no control over where the car that was demolished by a drunk driver ended up. And the insurance company had accepted responsibility for the cost of the vehicle.

I agreed with the Vandettas that this invoice seemed callous — an unnecessary cash-grab attempt.

Asking Avis about the charges related to this car rental crash

It was time to find out from our executive contact at Avis, the parent of Budget, if this was really business as usual.

Hi *****! How are you? We have another case here that I hoped your team could take a look at. The Vandetta family rented a car in Ft. Lauderdale for one week starting on Dec 16. It was a prepaid rental. A few days later, in the Florida Keys, a drunk driver hit the car. The other driver’s insurance paid for the damage to the vehicle; however (similar to the last case I sent you earlier this week), Budget continued to bill this family daily as if they still had the car until Jan 16, 2021. Those fees include a daily rate, taxes on the daily rate, and a one-way drop-off fee because some entity eventually dropped th the car off in Miami instead of Ft. Lauderdale. The total fees billed to the family after the accident and after the car was no longer in their possession was $2,370.

Could you see if your team could have a look at this case. I think there may be an error billing this family for late fees and one-way drop-off fees for a car? A towing company took the car from an accident scene and they no longer had possession as of Dec 19. Thank you!! 😊

Our Avis contact is always super helpful and swift with his resolutions, and he didn’t disappoint with this case either.

I contacted him at 8 am on a Sunday, and by 10:30 am, the Vendettas four-month battle was finally over. Budget would reverse all the fees it had charged to the family’s credit card.

The good news: Stop the presses! We’re getting a refund

I soon heard from Joe.

HOLD EVERYTHING!!! STOP THE PRESSES!!! My wife just received an email. [That showed a refund pending]

We’re obviously confident that Budget will refund our $2370 this week. Thank you!!

Joe soon after receiving the good news from Budget

And two days later, the Vandettas confirmed that Budget had reversed the charges. And now Vandetta is truly confident that he and his family can put this entire unpleasant experience in the past right where it belongs.

Travelers often arrive at the car rental counter fatigued after a long flight — eager to get their vacation literally on the road. But impatience can often lead a consumer to neglect to review the contract. That’s a mistake that can quickly turn quite costly — especially if a drunk (or inattentive) driver hits their rental car.

Here are a few things to keep in mind before you take the keys to your next rental vehicle.