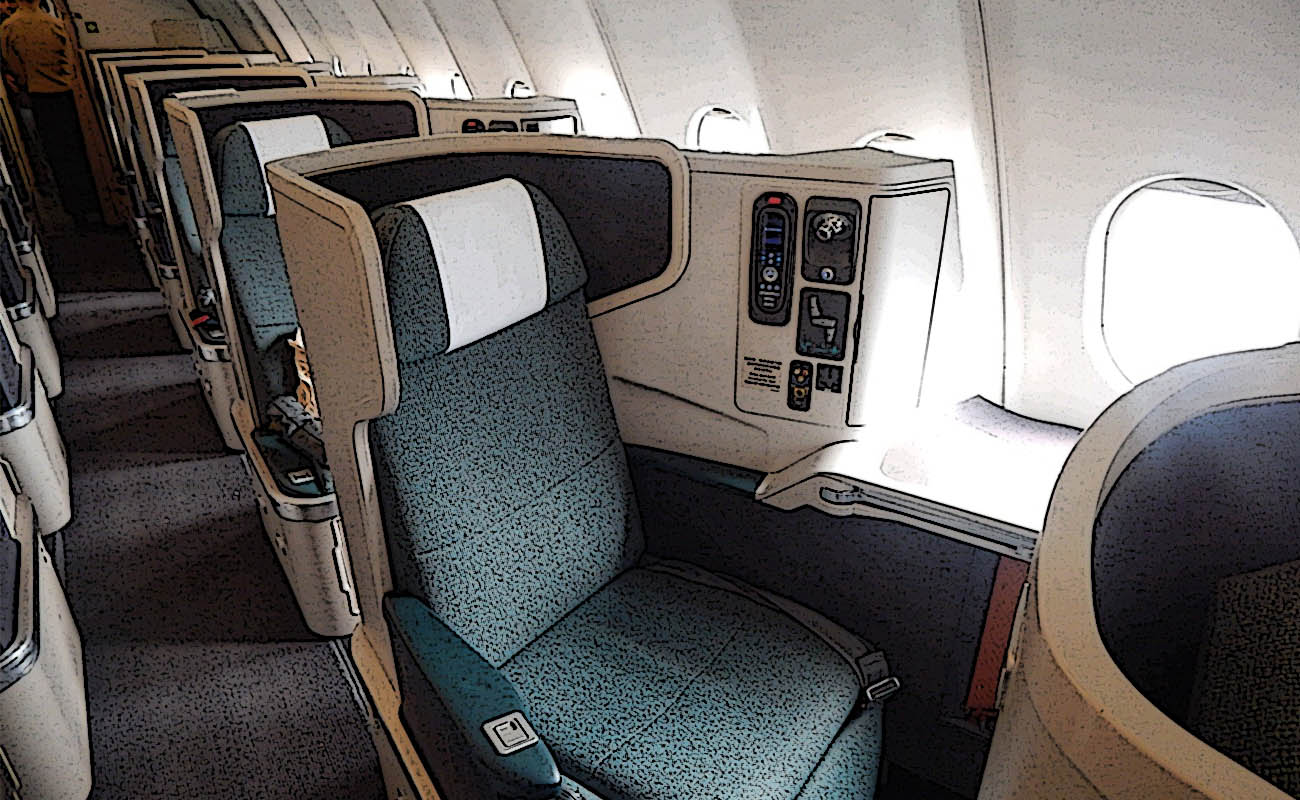 Could asking for an upgrade to business class end with you getting kicked off your flight — and banned for life?

“Social Influencer” Jacqueline Ng insists that’s exactly what happened to her when she recently asked for an upgrade. Cathay Pacific agents turned down her request in no time and then kicked her off the flight. Worse, the airline accused her of fraud and banned her from all future flights.

Jacqueline says this is all a misunderstanding. Now she wants our advocacy team to investigate and ask the airline to reverse the banishment.

This case provides a warning to all passengers looking for creative ways to score an airline upgrade. If you’re not careful, these requests can backfire — spectacularly — and you could even wind up being removed from your flight, too.

Asking for an upgrade on a very long flight

Jacqueline says that her shocking dilemma began in May during a round-trip journey from Taiwan to New York. She purchased a premium economy ticket and then decided to ask for an upgrade to business class.

Before boarding the initial Taiwan to JFK flight, I filled out an online form. I emailed Cathay Pacific to try and upgrade to business class on both my outbound and return. I received an email confirming that I was eligible for a business class seat. The email from Cathay Pacific clearly stated the upgrade was only possible, if available.

When Jacqueline arrived at the check-in counter for the flight to JFK, she asked about the upgrade. She gave the agent a copy of the Cathay Pacific email indicating her eligibility for a move into business class. Unfortunately, the agent explained, the airline would be unable to upgrade her on the long flight. Jacqueline flew to New York in her premium economy seat without incident.

But the wheels had already been set into motion for the awful eventuality.

Surprise! You’re kicked off the flight

Jacqueline checked in for her return flight the night before its scheduled departure. She printed out her premium economy boarding pass with no problem. But when she arrived at the airport, she once again asked for an upgrade to business class. Jacqueline showed the agent the email from Cathay Pacific customer service claiming she was eligible for the upgrade.

This time, the agent took a look at the letter and called for his supervisor. This representative walked away from the counter for some time before returning with a startling announcement.

“[The supervisor] proceeded to give me a ‘refusal of carriage letter’ 30 minutes later,” Jacqueline recalled. “He stated that security said that Cathay Pacific did not send that email and that I had committed fraud.”

Standing at the counter in disbelief, Jacqueline says she couldn’t believe the absurdity of the accusations. She had only asked for an upgrade, but now she was being kicked off the flight — with no way home. She tried to reason with the supervisor; however, she quickly realized the decision wasn’t negotiable.

Dumbfounded and embarrassed, Jacqueline made arrangements on another airline and headed home. On the long flight, she had plenty of time to mull over the shocking turn of events.

Accused of presenting fraudulent documents to ask for an upgrade

Initially, Jacqueline believed that she would easily be able to clear up this “misunderstanding.”

Following much of the helpful advice that I offer in my self-advocacy guide, Jacqueline composed a short, polite email. She sent a request to both Cathay Pacific and its parent company, Swire. She wanted the airline to refund the flight it forced her to buy when the agents denied her boarding in New York.

Several weeks later, a Cathay Pacific executive sent an official response to Jacqueline. In that letter, the executive explains that the airline’s security department determined that the email Jacqueline had presented to ask for the upgrade was fraudulent. It had not originated from Cathay Pacific. However, if Jacqueline could provide the embedded information from the email to show from where it came, the airline’s team would be happy to review this evidence.

In the case that you are certain of the authenticity of your emails, please facilitate our further investigation by sending us:

2. *The “.eml” document of the two upgrade emails you received from us. You may follow the steps as detailed in the attached document;

3.  Any other supporting information.

*The “eml” version of the email would provide the electronic metadata of the document — the details of exactly where the email originated.

“All further communication must go through my legal counsel.”

In response to this email, Jacqueline made a crucial mistake in her self-advocacy mission. Not only did she not provide the requested information, she told the executive that she failed to see “the relevance of this request.” Then she announced that all further communication should go through her own legal counsel.

Cathay Pacific appeared more than happy to comply with Jacqueline’s instructions. The executive team sent another, more to the point accusation.

We verified with R**** and understand that he did not send any such emails to you. We also cross-checked our email systems and confirmed no emails were delivered to you on the date and time as indicated in your emails.

To the best of our knowledge with the information on hand, we concluded that the emails you presented for upgrades were not issued by Cathay Pacific Airways. The decision was made to refuse the carriage of you given your repeated attempts to present a fraudulent document for upgrading on our flights.

The email string ended with the Cathay Pacific team saying it would await any further communication from Jacqueline’s “legal counsel.”

Unfortunately, Jacqueline didn’t have any legal counsel — it was an empty threat, and the airline had called her bluff.

Asking our advocacy team for help

When I read through Jacqueline’s request for help, I was highly doubtful that Cathay Pacific would respond to my inquiries. We know that once a consumer threatens legal action, most companies send the case to their own legal departments. The regular channels that companies offer us for mediation typically close at that point.

But I went through all of the other documentation that Jacqueline provided. She was still under the impression that if only the airline took a look at her upstanding character, their team would realize she is no security threat. In fact, she pointed out that she had initially moved to Asia to work for Swire (the parent company of Cathay Pacific).

I moved to Hong Kong to work for Swire Resources as a Brand Manager in June 2018. I resigned from the role in November 2018 on my own self-accord. You can see that both my employee profile and reviews were extremely stellar and I received strong recommendations from my Director/HR. You can Google my background to also see that back in Canada; I won the Top 20 Under 20 National Award, given to young Canadians who have shown innovation, leadership, and achievement in society. The above speaks to my character.

But despite this glowing review, it was clear from the paper trail that Cathay Pacific had determined that the document Ng produced on two occasions to ask for an upgrade was fraudulent.

Did a social influencer present a fraudulent document to ask for an upgrade?

I asked Jacqueline to send me a copy of the upgrade eligibility document. And that’s where things got a little weird.

Nowhere in any of Jacqueline’s correspondence with the airline or with me until that point did she mention anything about being a social media influencer. But in the email that Cathay Pacific says is a fraud, it’s clear she’s presented herself as an influencer to request an upgrade.

In case you’ve never heard the term, a social media influencer is someone who has a strong social media following — usually on YouTube or Instagram. In exchange for mentioning a product or company on their social media feed, businesses will offer freebies to the “influencer.”

I asked Jacqueline if she had portrayed herself as a social media influencer to ask for the upgrade. She didn’t answer that question but continued to reiterate that Cathay Pacific had wrongly kicked her off the flight. When I pointed out that her case is in the legal department and so had escalated beyond where a consumer advocacy team can help, she expressed surprise.

How is [my case] escalated to the Cathay legal department when this is my first time ever having any flight issues of any kind with Cathay. And to top it all off, [I didn’t gain anything] in the situation?

Unfortunately, the executive team had already explained to her that it didn’t matter if she had ultimately benefited from the questionable email. Their decision remained the same.

Asking Cathay Pacific to weigh in about this upgrade request

I decided to send Jacqueline’s case over to the executives at Cathay Pacific. I hoped to provide some closure for Jacqueline. Based on the lengthy paper trail from the airline, it seemed clear that their team had conducted an extensive investigation.

Surprisingly, I soon heard back from the corporate communications department of Cathay Pacific.

Thanks for reaching out. We reviewed the case in question thoroughly. We certainly do not take any decisions we make with regards to our customers lightly; however, we do not comment on individual cases.

And so, I broke the bad news to Jacqueline that the airline doesn’t intend to reverse its decision. I suggested that if she could provide the metadata of the upgrade eligibility email, she may be able to prove it came from Cathay Pacific. So far, she’s not been able to gather that information, and she remains banned from the airline.

Travelers should be aware that airlines seem more willing than ever to put their (former) passengers on the blacklist.

In Jacqueline’s case, Cathay Pacific refunded the unused segment for the flight she was kicked off of. But it has declined her $1,400 request for reimbursement for the new flight. This is in accordance with the terms and conditions of Cathay Pacific.

We will not be liable for any consequential loss or damage alleged due to any such refusal to carry or removal en route.

Jacqueline says she intends to hire that legal counsel she referenced earlier in her plight. She’s hopeful that an attorney can prove that she isn’t guilty of creating fake documents to score an upgrade — and that the airline kicked her off the flight in error.

The fact is, no matter what you read, free or spontaneous airline upgrades are almost impossible to snag. The airlines typically dole those upgrades out to upper tiered frequent flyers in an automated fashion. There is a trickle-down effect to the lower-tiered frequent flyers if the business class seats remain unoccupied closer to the flight. The airlines make almost no upgrades available to infrequent travelers or passengers not willing to pay for the upgrade.

But here’s how you might end up in an upgraded seat on your next flight: